A True Woman of God 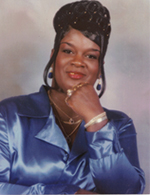 Apostle Barbara Rogers is a true Woman of God; the Bible declares God will give Pastors after his own heart. Truly Pastor Rogers is a bonafide Pastor sent by God to do a work for such a time as this. She has overcome many obstacles in her life and triumphantly stood the test that she had to endure. Pastor Rogers knows what it means to abound and abase, how to do with and how to do without. God has taught her obedience by the things she has suffered. She has paid her dues.

God has seasoned this Woman of God to be an example to many that read her life. She loves God with all of her heart, mind, body and soul. She presents her body as a living sacrifice, Holy and Acceptable unto God, which is her reasonable service. She is a mother of four and a Grandmother of three handsome grandsons and two beautiful granddaughters.

Although Pastor Rogers was saved many years ago while she was in prison, she rededicated her life back to God over eighteen years ago. This was “The Potters House” for Pastor Rogers. This is where the Master Potter himself shaped and molded her into the Woman of God that she is today.

One Way Deliverance Ministries was impregnated into her spirit by God. He gave her the name in which the ministry should be called, before the fullness of time came forth. She accredits that her foundational teaching which came from Mt. Caramel Missionary Ministries. Apostle Thomas was very instrumental in her new birthing experience. When God spoke and declared it was time to move on, he led her to Apostle Gail Patterson, who was very instrumental in the birthing of Pastor Rogers. She is the spiritual midwife God used in helping Pastor Rogers birth her purpose.

God taught her that the Gospel is a business; it is Gods’ business and He has ordained managers to oversee His business. She learned how to conduct herself in ministry. She learned that it was necessary to serve before she could become an effective leader. She gives God all the glory. Pastor Rogers has moved out by faith and is fulfilling her purpose, which is to mold Gods’ sheep. Her objective is to see Gods’ people Saved, Healed, Delivered and Set Free and to begin to walk in the Blessings and Prosperity of God.

Pastor Rogers is the pastor of One Way Deliverance Ministries. The ministry has embarked upon its tenth year of service. This is just the beginning! There are so many phases of the vision God has impregnated this Woman of God with. We still see the vision unfolding and being shaped just as God promised. For example, Pastor Rogers has taught us that giving is the essence to living, and how to obtain the blessings of God by doing so. She’s the Founder and Overseer God purposed for this part of the vineyard.

Because of her obedience to the Lord, He has allowed her to accomplish many things for His Kingdom. While on the Evangelistic field the Lord allowed many souls to come into the knowledge of Salvation, Deliverance and Freedom. One Way Deliverance had been broadcasting for 6 years, on the Reach Cable Station, Channel # 78.

Pastor Barbara Rogers is the founder of W.O.V. Women of Vision, which was founded in 1999. God has moved in an awesome way in her life. While in New Orleans, God allowed her to not only purchase the One Way Deliverance Ministries building, but also about the entire block of 2900 Franklin Avenue. Pastor Rogers also is the Executive Director of Hand Up Program Inc. which is a branch of One Way Deliverance Ministries. The Hand-Up Program includes a Food Bank which feeds 500 hundred families or more on a monthly basis, a clothing bank, and affordable housing for residents of East Baton Rouge Parish and surrounding areas. The Hand Up Program also operated a Social Detox Center and a Residential Boarding Care Service, which was operated and funded through the Ministry up until Hurricane Katrina came in and cleansed the city.

After this point God spoke to Pastor Rogers and told her to relocate the ministry to Baton Rouge, Louisiana. Pastor Rogers, being an obedient servant, obeyed the voice of God. In a short time God allowed her to purchase 2 buildings for the Sanctuary and for the Food and Clothing Bank. She does not deny that God is doing a new thing for his people.

In 2007, Pastor Rogers was named as one of the leaders of Women of Vision for the Louisiana region, which is a branch of the Foundation for the Mid-South Visionary Institute, under the leadership of Pastor Steve Cooper. Pastor Rogers truly glorifies the true and living God for all the things that he has done in her life, for she knows that he has done a great work. We truly thank God for this great Woman Of God.

The Lord has done great things for us; whereof we are glad. Psalm. 126:3

Because of Him,
Pastor Barbara Rogers